Rose Hill Cemetery was established in 1913. It is a privately held company incorporated in Pennsylvania.

“PASTOR’S REPORT: Father Joseph Wargo reported that he had looked at the lot at Rose Hill Cemetery which Olga McKitten has donated to the church. It is on a slight grade. After some discussion, it was suggested that the owner of Rose Hill be contacted to see about changing it for one on the level. All were in favor of accepting the donation.”

“Rose Hill Cemetery Assn. donates space to St Andrew Orthodox Church, Lyndora, PA to erect a monument to their liking to be used for service whenever they choice {sic}. This space is located in Section ‘C’ Lot 209 ½ approx. 40 sq. ft.” 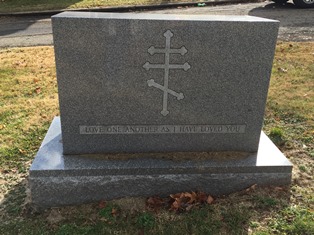 The granite Rose Hill Cemetery Altar is in memory of Matilda L Krepinevich. She was born on 2 April, 1915 in Butler to Wawro Zmijowski from Benewa/Byeneva, Galicia/Ukraine and Mary Levitsky from Bohatkivtsi, Galicia/Ukraine. Matilda married Victor F Krepinevich 8 June, 1940. She was a member of St Andrew’s Sisterhood of the Altar. Matilda passed away 4 June, 1987 and was buried at North Side Cemetery.

Victor F Krepinevich was born in Lyndora 8 November, 1916 to Theodore Krepinevich from Liascovich, Poland and Paraskeva ‘Pearl ‘ Harupa from Evanovo, Poland. Victor served as a Navy gunner’s mate in the Pacific during WWII, was a life member and past commander of Michael Kosar American Legion Post 778 in Lyndora, was a life member of the Slovak Sokol Society, and a lifelong member of St Andrew’s. At Armco he was a foreman in the transportation department and retired after 43 years. Victor passed away 23 September, 2003 and was buried at North Side Cemetery. 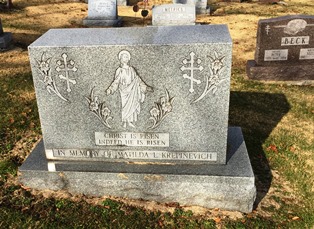 In the 1940s Wallace operated the Hudson Automobile Agency, later founding the Hudson Roller Rink on West Jefferson Street. He was a co-founder and operator of the Castle Roller Rink on New Castle Road. He was also engaged in breeding and racing of harness race horses. Wallace was a member of St Andrew’s Orthodox Church.

Wallace married Olga (nee Michnuk) Collins 8 July, 1949. She who was born 18 August, 1910, in Lyndora to Ilia ‘Alex’ Michnuk and Xenia Vlasuk from Russia. Olga’s first husband, Clarence W Collins, died 8 December, 1932. Olga was employed by Aluminum Research Laboratories and for 16 years was employed by Allegheny Ludlum Steel Corporation. For 20 years she owned and operated a horse-breeding farm for harness racing. She was a member of St Andrew’s Sisterhood of the Altar.

The altar was created by the Sechler Memorial Company.

The Sechler Memorial Company was started in the 1880’s and was located at 212 North Main Street, Butler PA. Around 1914 the Sechler family moved their operation to 219 West Jefferson Street which is the location of the current monument display and shop. The Sechler family maintained the family operation until 1968 when Wendall Sechler sold his business to Logue & Son Memorials.

Logue & Son Memorials was started in 1896 and has been a family owned and operated business for five generations. It is currently owned by L. Dana Logue Jr., and L. Dana Logue III, the fourth and fifth generations of the family. They design and engrave the memorials at their Sligo PA shop.

This article was written by